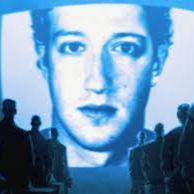 He explained the latest new capabilities of the Facebook platform, some of them absolutely world-changing for the Social Web. In closing his speech, Zuckerberg mentioned Moore’s Law, which was the basis for Intel’s success and meant (and still means) that processing power and storage doubles in capacity every two years.

Zuckerberg continued to state that he sees another law (“Zuck’s Law”) which means that the amount of information people can share about themselves doubles every year. He implied that Facebook will support users in doing so and that this will be the base for Facebook’s ongoing success.

Now, the whole trend of Social Networks was enabled by the fact that sharing became so much easier. However, what does it mean to share each year twice as much? That can either happen by sharing much more frequently or by sharing many more actions.

The new Facebook announcements will lead to both: the new Ticker is meant to enable the sharing of much more incidental information, just caused by using (mobile) applications that post constantly into the ticker stream. And the applications will explode the dimensions that are included in the data sharing. While in the past the majority of shared information was around communication and games, the future will add every media consumption and a huge number of lifestyle activities.

At the same time, it is another big step towards logging all activities of a massive number of people.

And, to come back to Zuck’s Law, how can that be doubled again and again in the coming years?

The only logical answer is that increasingly every small action of users will be recorded. While the first stage was about digital objects, the next stage will include more and more real world objects. Later, the tracking of the human body (heart beat, blood sugar, etc) will follow, until finally the feelings of people might become the ultimate goal. Understanding the wishes (shopping!), fears and hopes of people.

A Huge Change of Social Norms

The conclusion is: if Zuck’s Law turns out to be right and if society accepts the trend towards complete self-monitoring, this will be the end of privacy.

For the past decades, there were various science fiction novels that painted a world without privacy in dark colors. Zuck’s Law might quickly lead to a world where consumers give up privacy voluntarily, because they believe that the benefit of doing so outweighs the disadvantages.

Time will tell whether this belief is correct.